Yet the soul does not have to wait for death to begin its ascent. The mysteries take the view that the soul wants to regain her freedom and that this is possible on earth through practices such as fasting and purification, in initiation, and during deep sleep. Furthermore, if such practices are not begun by us on earth, the soul will take its desires for material things into the after-death state and be variously tortured and tantalized by its cravings for tastes and possessions it can no longer have.

The successful initiates of the lesser mysteries could prepare themselves for the mysteries of Demeter. The primary source for the sequence of events is Hesychius of Alexandria, a 5th-century CE grammarian, but in fact we have very little ancient information on the specifics of either the lesser or greater mysteries of Eleusis, and scholars are not in agreement on the subject. In one reconstruction, on the first day initiates assembled, stated their qualifications, and began preparations. On the second the group marched to the sea and bathed in the Saronic Gulf near Eleusis. Seawater was considered a cure for some illnesses, and in this ceremony it may have been used for purification.

On the third day initiants fasted and focused on things beyond the material, in commemoration of Demeter's wandering in search of her daughter. On the fourth day an offering was made to Demeter and Persephone. To the Greeks a sacrifice was a feast for all participants to enjoy, performed in a way pleasing to the gods. Some days of the greater mysteries were also accompanied by gymnastic exhibitions, music, and other public shows.

On the fifth day the initiants marched solemnly two by two, each carrying a torch, into the temple of Demeter at Eleusis, guided by a torch bearer who represented the sun. This ceremony corresponded to Demeter's search for her daughter by torchlight. According to some authors the sixth day, in contrast, was a joyful festival of the god Dionysus or Bacchus, where a procession was led by the bearer of the god's image or statue, and initiants were crowned with myrtle leaves and given a Bacchic staff wreathed with ivy and grape leaves.

In part Dionysus was, like Demeter, an agricultural god: she represented grain or bread, and he represented wine. Moreover, in Blavatsky's words, Demeter or Ceres "was the female productive principle of the Earth; the spouse of Father Aether, or Zeus; and Bacchus, the son of Zeus-Jupiter, was his father manifested; in other words, Ceres and Bacchus were the personifications of Substance and Spirit, the two vivifying principles in Nature and on Earth" Collected Writings Bread and wine later found their way into the Christian Eucharist.

On the evening of the sixth day the highest initiation ceremony, the epopteia , was begun in the outer court of the Telesterion temple.

What are the Eleusinian Mysteries?

Because there are no definitive accounts of the ceremony, we give one reconstruction of the events: The attendant or herald, corresponding to Hermes as guide of souls, exacted a solemn oath of silence from each initiant, who returned formula answers. Initiants then put on a new set of clothes covered with the skin of a fawn, symbolizing their regeneration. At the conclusion of the ceremony all lights were extinguished.

In complete darkness lightning flashed, thunder rolled, and unearthly noises were heard, symbolizing Tartaros, the terrifying hell of those who do not work with nature, and also the world coming out of chaos under the command of the demiurge or creator who worked the raw forces of nature to fashion a new state.

Initiants were then conducted to the inner adytum which was illuminated intensely. There they saw a resplendent statue of Demeter in an epiphany called autopsia , a seeing with one's own eyes.

It was a re-creation of heaven, with harmonious tones and dazzling light, to prepare for the experience of the highest heaven after death. The climax of the greater mysteries, which revealed to those sensitive enough to see it something of the mysteries of creation, growth, and consciousness after death, closed with the words konx om pax, which do not appear elsewhere in Greek.

Then there was silence. On day seven the initiants marched about ten miles from Eleusis to Athens, stopping to observe the location of the first fig tree and at the bridge spanning the Cephisus River, where local people teased the initiants, reproducing the waiting-lady's attempts to make Demeter smile. On the eighth day latecomers to the Eleusinian mystery, or those who missed a day, were given a chance to catch up because, according to legend, the divine physician Asklepios had come late to the festival.

On the ninth and last day the ceremony began before dawn. One vessel filled with a mixture of wine and water was slowly poured out towards the rising sun, the east belonging to Zeus. A second was likewise poured out towards the setting sun, the west belonging to Hades. While these were being poured, initiants alternately looked towards heaven and earth, in recognition of heaven the father of all things and earth the mother of all things. More information about this seller Contact this seller. 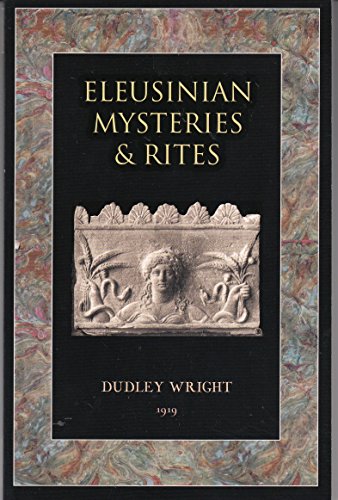 View all copies of this ISBN edition:.

We know that extravagant and costly dresses were regarded by Demeter with disfavour, and that it was forbidden to wear such in the temple. Jewellery, gold ornaments, purple-coloured belts, and embroideries were also barred, as were robes and cloths of mixed colours. The hair of women had to fall down loose upon the shoulders, and must not be in plaits or coiled upon the head.

No woman was permitted to use cosmetics. A procession was formed, in which all joined and made their way to the sea or the lakes, where they bathed and purified themselves. This general purification was akin to that practised to this day by the Jews at the beginning of the Jewish year. The day was consecrated to Saturn, into whose province the soul is said to fall in the course of its descent from the tropic of Cancer.

030-LevityZone: Eleusis on the Playa

Capella compares Saturn to a river, voluminous, sluggish, and cold. The planet signifies pure intellect, and Pythagoras symbolically called the sea a tear of Saturn. The bathing was preceded by a confession, and the manner in which the bathing was carried out and the number of immersions varied with the degree of guilt which each confessed.

According to Suidas, those who had to purify themselves from murder plunged into salt water on two separate occasions, immersing themselves seven times on each occasion. On returning from the bath all were regarded as "new creatures," the bath being regarded as a laver of regeneration, and the initiates were clothed in a plain fawn-skin or a sheep-skin. The purification, however, was not regarded as complete until the following day, when there was added the sprinkling of the blood of a pig sacrificed. Each had carried to the river or lake a little pig, which was also purified by bathing, and on the next day this pig was sacrificed.

The pig was offered because it was very pernicious to cornfields.

On the Eleusinian coinage the pig, standing on a torch placed horizontally, appears as the sign and symbol of the Mysteries. On this day also some of the initiated submitted to a special purification near the altar of Zeus Mellichios on the Sacred Way.

The Eleusian Mysteries: Initiation in the Ancient World

For each person whom it was desired to purify an ox was sacrificed to Zeus Mellichios, the infernal Zeus, the skin of the animal was laid on the ground by the dadouchos, and the one who was the object of the lustration remained there squatting on the left foot. The Archon Basileus, assisted again by the four epimelet?


This ceremony took place in the Eleusinion at the foot of the Acropolis. The day was known as the Day of Mourning, and was supposed to commemorate Demeter's grief at the loss of Persephone. The sacrifices offered consisted chiefly of a mullet and of barley out of Rharium, a field of Eleusis.

The oblations were accounted so sacred that the priests themselves were not permitted, as was usual in other offerings, to partake of them. At the conclusion of the general ceremony each one individually sacrificed the little pig purified in the sea the night before. The hog of propitiation offered to Frey was a solemn sacrifice in the North of Europe and in Sweden, down to modern times, the custom has been preserved by baking, on Christmas Eve, a loaf or cake in the form of a hog.

One kind of these cakes was known as "ox-cakes"; they were made with little horns and dedicated to the moon.

Another kind contained poppy seeds. Poppy was used in the ceremonies because it was said that some grains of poppy were given to Demeter upon her arrival in Greece to induce sleep, which she had not enjoyed from the time of the abduction of Persephone. Demeter is invariably represented in her statues as being very rotund, crowned with ears of corn, and holding in her hand a branch of poppy. The torches were waved about and changed from hand to hand, to represent the wanderings of the goddess in search of her daughter when she was conducted by the light of a torch kindled in the flames of Etna.

The "fair young god," Iacchos, or Dionysos, or Bacchus, was the son of Jupiter and Ceres, and accompanied the goddess in her search for Persephone. He also carried a torch, hence his statue has always a torch in the hand. This statue, together with other sacred objects, were taken from the Iacchion, the sanctuary of Iacchos in Athens, mounted on a heavy rustic four-wheeled chariot drawn by bulls, and, accompanied by the Iacchogogue and other magistrates nominated for the occasion, conveyed from the Kerameikos, or Potter's Quarter, to Eleusis by the Sacred Way in solemn procession.

It was on this day that the solemnity of the ceremonial reached its height. The statue, as well as the people accompanying it, were crowned with myrtle, the people dancing all the way along the route, beating brass kettles and playing instruments of various kinds and singing sacred songs. Halts were made during the procession at various shrines, at the site of the house of Phytalus, who, it was said, received the goddess into his house, and, according to an inscription on his tomb, she requited him by revealing to him the culture of the fig; particularly at a fig-tree which was regarded as sacred, because it had the renown of being planted by Phytalus; also upon a bridge built over the river Cephissus, by the side of which Pluto descended into Hades with Persephone, where the bystanders made themselves merry at the expense of the pilgrims.

At each of the shrines sacrifices and libations were offered, hymns sung, and sacred dances performed.